This is a supplementary reader at the intermediate level for students of English.
30 pages
Illustrations and cover © Peter Kent 1996, 2009, 2012

These are the experiences, in their own words, of more than 40 young men and women from 13 countries or regions who have been au pairs in Ireland. They tell what it was like for them, and they explain how they avoided or solved some of the problems you might encounter if you decide to be an au pair. They also talk about why being an au pair enriched their lives and filled them with self-confidence.
Host mothers also share their insights into how families and au pairs can live and work together in harmony.

Richard Marsh has been an EFL (English as a Foreign Language) teacher in Dublin. He does not place au pairs with families.

Golden, a very bright and good time, but too short; six months is not enough.

I went au pairing because it is an easy way to go away when you are not an adventurer, and I found it lovely to live with people you don’t know. Moreover, it’s a good way to learn a language. In Ireland it’s fine, because you are not frightened because Irish people are friendly and helpful, and at school you meet a lot of friends, which is very important . 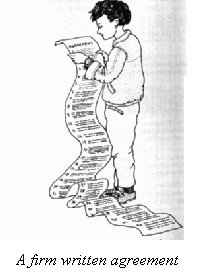 Au pairs, agencies, and the Council of Europe say that a firm written agreement with the family before coming to Ireland is the best way to avoid problems and misunderstandings.

I think it’s very important to write a lot of letters just to get to know each other, so you know what to expect – if it’s a whole family or if they’re separated, if the father comes to the house to collect the child, what the relationship is between the mother and the father if they are separated.

It’s also good to speak on the phone, because you can ask questions and get immediate answers.

Fátima (Basque, 18) and Mayte (Spanish, 20) were placed by the same language school agency and were in the same class in the school. When Mayte went back to Spain, Fátima left her family and changed to Mayte’s family without consulting the agency.

I spoke to the previous au pair on the phone before I came, and she was still here for three days when I arrived, so I knew what she did in the house. I changed families because they were always telling me how good the au pairs were who came before me, and they wanted me to do more than the previous one did.

Corinne (French, 22) spoke no English when she arrived in Galway in September. After one unhappy week of misunderstandings, she hitched to Shannon Airport to go home, but found it was too soon to use her return ticket. Then she hitched to the home of the independent agent near Dublin who had placed her and was given another family.

My second family was absolutely very bad. I think there were problems between the man and the woman, and I was like an ideal subject of confrontation between them. The children were very wild, and after one very bad day they decided I had to leave the house. So I met a French girl in Dublin and she was very busy with five children, so I came to help her. The family was horrible. They wanted children, but they didn't care about them.

I stayed one month there. I arrived in my last family. They looked much better than the others, but they used me too much. There was a lot of work, but the woman was very friendly in the end. It’s very hard to live with your boss unless the relationship is good.

Can Boys Be Au Pairs?

Boys are allowed by law to be au pairs, but some agencies refuse to place them. Agencies reckon about one percent of au pairs are male, and they are usually successful. Michael, a German, au paired in a family with five children in a small town north of Dublin. They were doubtful about taking a male au pair at first, but after he left, his “Irish mother” said:

From the very beginning he was great, except he could not cook, clean or iron. But in one month he mastered all of these skills. We all loved Michael very much, and he was just like a big brother to our children. There was no such thing as hours off at certain times. He went away when he had something to do, and we did the same. We planned a lot in advance.


If you want to be an au pair in Ireland, you can go through an agency in your own country or an Irish agency listed on the MEI-RELSA website.

Richard Marsh does not place au pairs with families.